We visited Northern Stage in Newcastle to watch the ballet production of Rumpelstiltskin by balletLORENT and here’s our review story….. 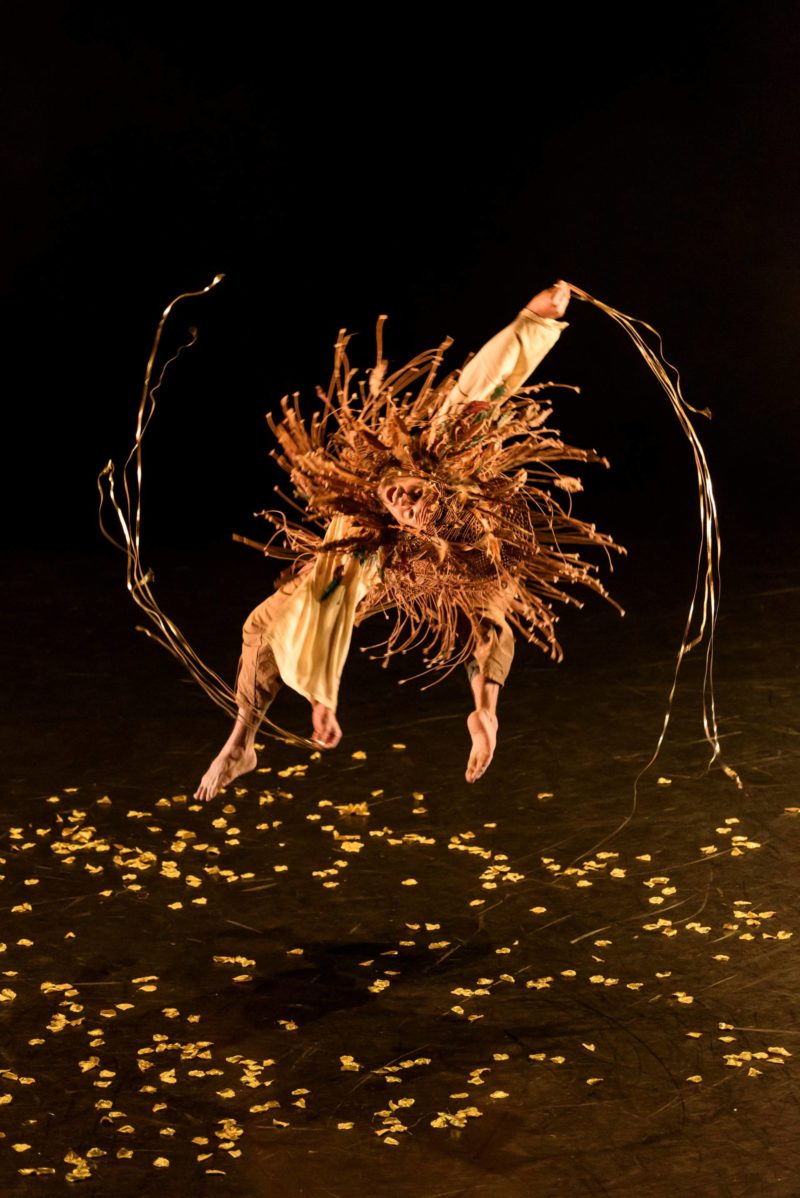 A golden Queen and a handsome King spend a lot of time caressing and kissing. Watching over their beautiful flock in a rural world of balletLORENT.

Frolicking and free from babies to grannies this idyllic world is one in which you would want to be.

Alas tragedy occurs at the birth of their son. The sun goes down and the golden love has gone. The King is now an angry man, denying the child, his only one. A raging man who blames his son for the loss of his wife, a boy desperate for love but shunned from the King’s life. Little lambs and mummy sheep playfully watch and keep a smile on our faces when the King’s actions are a disgrace. 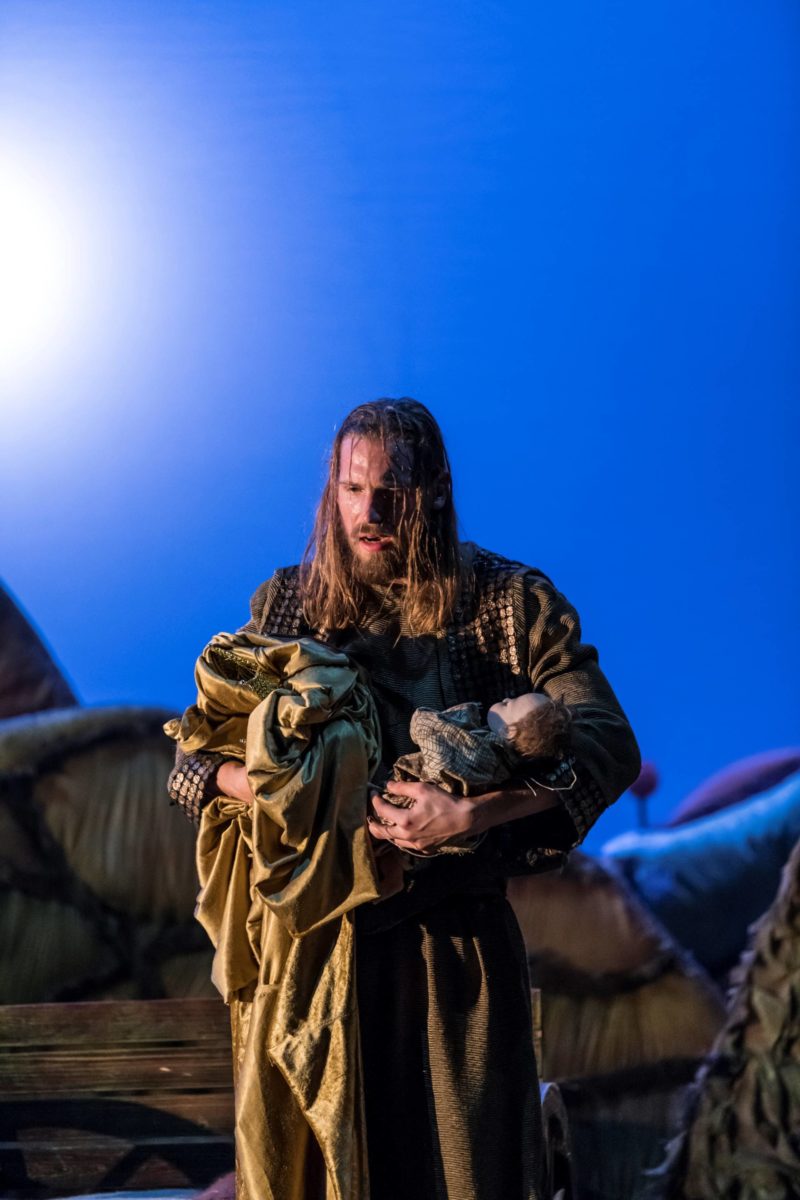 Left to roam among the countryside the boy becomes one with nature; a little feral and wild. The children are kind beckoning him to play and a shepherd’s daughter brightens his day.

As the mourning continues the villagers embark to make the King happy and have a lark, but alas the King was now mean and dark; far from the passionate bright light that we saw at the start. The only thing that kept him going was the thought of gold which sets the scene for a story retold.

A shepherd not a miller be the boasting father of a little she. For the man gave up his daughter, a lie could lead his sheep to slaughter. As of course it can’t be true, to weave straw to gold…can you?

Three rooms filled with straw and a challenge with each one and Rumpelstiltskin was the hero elevating him from a position of zero. The gift of changing anything to gold was given by his mother; a gift like this can’t be squandered nor smothered. With each challenge, he won a prize. The Shepherd’s daughter had nothing to lose yet and agreed to a ring, a kiss and her first baby (she lies). 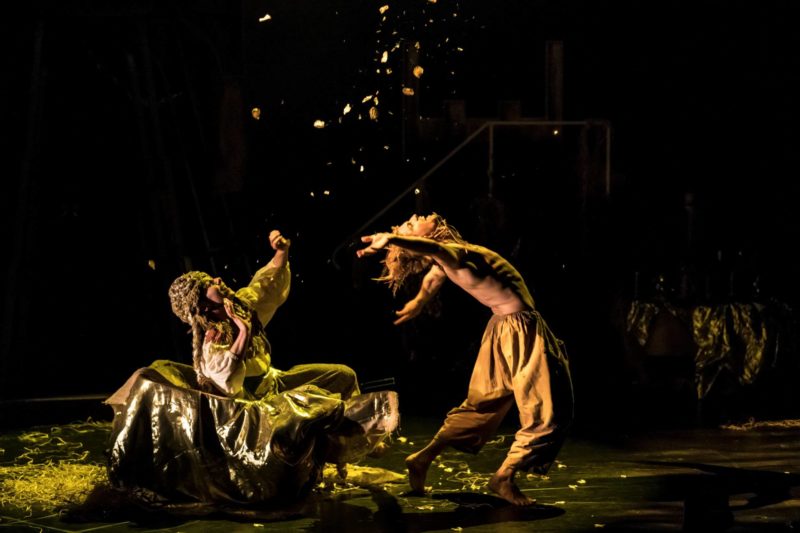 The marriage was quick and so was the baby as nine months later she was in labour. The gift of her baby was now long forgotten but Rumpelstiltskin still wanted the offering.

The distress that this caused to the Shepherd’s daughter, made him think of the past the games and laughter she’d taught him. Three days were given to find this youths name otherwise who knows what would be the baby’s demise?

The whole kingdom searched for the name but none were found true. But the shepherd didn’t give up and did all he could do. He heard a youth in a clearing dancing around a fire and suddenly heard the name of desire. The shepherd rushed back to his daughter and told of his news now a game with Rumpelstiltskin did infuse.

Upon finding his name memories of fondness came flooding back – this youth was boy she had loved in the past. The King saw it too and the hate turned to love and he was released from his life to be with his queen above.

Rumpelstiltskin and the shepherd’s daughter now became a happily ever after.

The venue:  Northern Stage Newcastle – big enough for impact and small enough for intimacy.
My plus 1:  Daughter aged 7 who has been connected with Northern Stage since she was a bump in the 40 year anniversary ’40 babies’.
The cast:  Aged 4 to 79 both professional and from local schools, care homes, day centres, community groups (including some people from a knit and natter group). Anne Mead (see the video I shared on Sofa Stories Facebook page), reminded me of my gran and that made me smile.
Rehearsal director: Caroline Reece sat directly behind us during the performance and it was lovely to speak to her during the interval about the performance.
The audience:  A truly eclectic mix spanning generations. Bring everyone you know!
Advice:  If you are taking children do stick to the seven plus guideline as there are some dark parts that may cause younger people a little distress although these scenes didn’t seem to bother the younger cast members).
In show highlight: There were so many moments for me and I found my breath taken away as Rumpelstiltskin is a beloved dark fairytale in our household the added parts and adaptions of the story worked. When the little childhood versions of Shepherd’s daughter and Rumpelstiltskin appear on the
edge of a scene with the adults my heart was ablaze as childhood memories of friendship always seem to be the most special.
Interval highlight:  An avid fan of Ben Crompton was gushing over him and wanting to nab my pen to get an autograph in her programme whilst I was still using it (I was completing the feedback form).
Unexpected:  The level of emotion felt by both myself and my daughter. balletLORENT you brought me to the edge of emotion, made my heart pound and my eyes weep. And I thank you for that.
Warning:  Moral dilemmas of abandonment of a child. Violence towards a child (no one was hurt in the performance – it was very strongly implied). Verbal and threatening abuse of a girl and her father and his livelihood.
Quirkiest moment:  The dancing sheep, mmmmmmm it lightened it a little too far for me but I’m sure it will be loved by most.
At the ballet:  The thought of ballet can often turn people off or bring connotations of a non-inclusive club with membership only given to the truly gifted and well off. balletLORENT are far from this. They are a company so progressive and all-encompassing and embracing that it may drive  many of us to try and partake in ballet again (Dance City here I come) or at least in a knit an natter group and hope that in years to come the production comes around again and I too could be one of those grannies.

Overall:  I simply adore watching my daughter being drawn in and absorbed in a story, searching for my hand and putting my arm around her to hold her closer in the darker parts. Her naivety is a breathe of fresh air and she pointed out the kissing and the naked top half of Rumpelstiltskin. Emily loved it and clapped until the last person left the stage. She underlined her love by popping her gold coin in the heart bestowed emoji feedback cup to prove it.

Dates:  Rumpelstiltskin productions run at Northern Stage Newcastle until 28 October. Tickets are available from £10 so be part of the next well deserved standing ovation.

Disclaimer: We received complimentary tickets for the production but all content and thoughts our own.

Images included are by Khara Pringle and Bill Cooper.