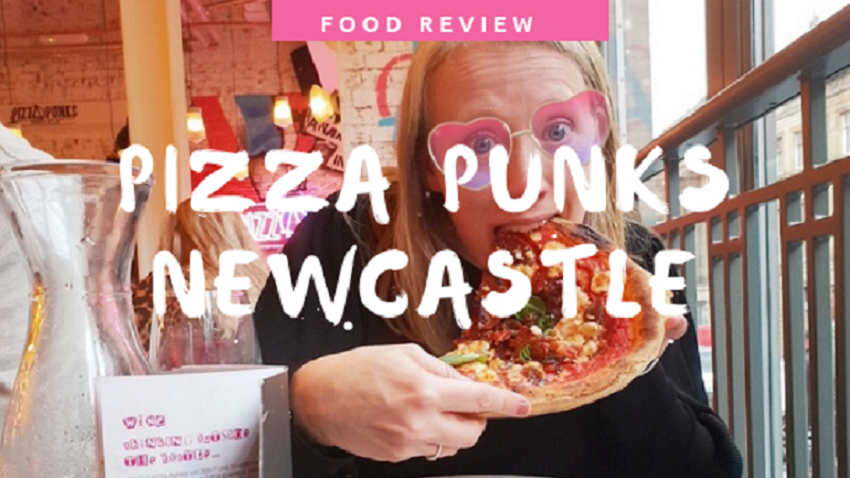 Alas we couldn’t make the preview night of Newcastle’s latest pizza offering, Pizza Punks but we received an open invitation to pop in when next in Newcastle, so we booked a table to see what the fuss was about.

Pizza Punks has opened up on Grey Street, which is already awash with an array of foodie offerings, so what would make me want to spend my hard earned pound here?

We walked into the restaurant at around 13:00 on a Saturday and I was surprised by how quiet it was although the inclement weather may have put people off venturing into Newcastle. We were shown to our table situated in the window, which is always my favourite spot as I do like a good people watch.

The little one’s took the comfy seats and Emily and Luke were instantly engaged with Andrew (assistant GM) when he gave them their menus saying ‘that’s yours’ whilst quickly and politely removing the pizza cutter from Luke’s hand saying, ‘that’s mine’.

The décor of the previous inhabitant is completely gone and what is left is a fresh and vibrant open plan eating area with an open kitchen too. Neon is a highlight of the restaurant and where it can be placed it has been but not too overboard.

Let’s talk toilets. Like most establishments on Grey Street the toilets are situated downstairs. The neon pink continues and feature vanity mirrors surrounded by bulbs along with a tattooed Marylin Monroe with her boobs out. There is also an accessible toilet come baby change room on the restaurant floor too.

The whole concept of the restaurant is great and inspired by the owners love of proper pizza and motivated by their drive to do something different, something unique. All adult pizzas are £10 no matter how many toppings you choose.

We perused the drinks menu first which included a vast array of ales and some cocktails I’d never heard of. As it was an afternoon with the children I opted for a small glass of wine, H2b had Pepsi, and we had a jug of water for the table.

Time to order the food. We went straight to the main event and didn’t try out the sides. After reading some other reviews, it sounds that I have really missed out here as the selection albeit small sound epic.

I love choice but I’m not great at decision making so I opted for a preselected version and as breakfast is my all time FAVORITE meal The Full English is what I chose, this consists of red sauce, mozzarella, egg, bacon, tuscan sausage, black pudding, hash browns and HP sauce. Cue my little girl and H2b looking a little disgusted at my selection. H2b had sourdough base, red sauce, mozzarella, pepperoni, nduja  chorizo, red onion and sun-dried tomatoes. The children had ham and pepperoni children’s sized pizza.

Whilst waiting for food both Luke and Emily enjoyed the colouring in sheets but Luke was even happier when he found a toy mini car that someone else left behind.

The pizzas came in a timely manner and looked great. The amount of sauce on mine though was a tad excessive but I was happy to dab it off. Tom, our waiter realised that I was a little overwhelmed and offered to change the pizza but I didn’t want to make a fuss so I chose to eat on rather then change. Andrew then came over and insisted I did get a fresh pizza. I genuinely think this change would have happened whether I was reviewing or not. At this point I did a pizza swap. My second pizza included  candied bacon, caramelised red onion, goats cheese, sun-dried tomatoes and basil – I was tempted to go ‘rogue’ but decided to stick to what I knew.

There was quite a delay in receiving the replacement pizza. The restaurant had filled up since we first arrived and there were people queuing to come in so this would explain the difference from order to arrival time. 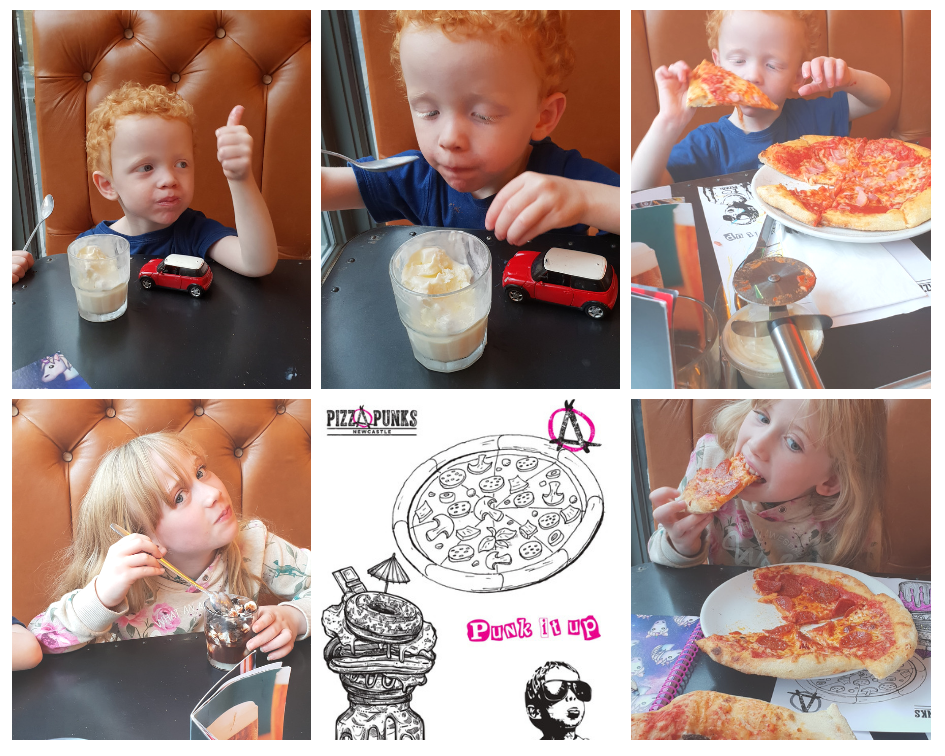 Dessert, the adults were stuffed but the children made room. Luke just opted for two scoops of vanilla ice cream with a splattering of marshmallows whereas Emily chose to have every topping which included chocolate chips, marshmallows, cookie crumbs and then topped it off with chocolate sauce. They were both more then happy but want to try the Freak Shakes next time (so far I’ve managed to swerved this culinary phenomenon).

I would have loved a coffee to finish my meal but alas Pizza Punks don’t serve it.

All in all we all really enjoyed it and we are already planning a return visit.

Thank you Andrew, Tom and Rachel for taking care of us.

Pizza Punks
34-40 Grey Street, Newcastle Upon Tyne NE1 8AE
Disclosure: We were guests of Pizza Punks. All views are my own.