I had scheduled 2015 to be the year of me, the year I turned forty, which when I actually see this in black and white seems rather selfish.

My dream was to get a little sports car, get married and have a honeymoon in New York or in fact team the wedding and honeymoon together in NYC. This is all before I knew baby two, Luke, was making an appearance.

For nearly four years, I had put off having baby number two, making every excuse under the sun not to. The reason I did this was simple.

I was scared, no petrified that I would loose myself again. Here’s my frank tale of my own personal experience.

Following the birth of my gorgeous little girl Emily, I felt bereft. Actually thinking back, it started to happen during my pregnancy.  I didn’t know who I was and how to be.

I mean, who in their right mind launches a new business just four weeks before the birth of their first child? Who works at their own event just six days before the birth humping boxes and putting up rails? Me, that’s who. I wasn’t in my right mind and I should have listened to the alarm bells already sounding.

I was used to being a fabulous partner, daughter, granddaughter, niece, friend and health & safety manager but then a new title of mummy was bestowed on me. It’s the one I’d always dreamed of having (although I felt I didn’t deserve it) but in reality as I looked in the mirror I ONLY saw mummy, I no longer saw ‘Suzanne’ a person whom I actually quite liked. 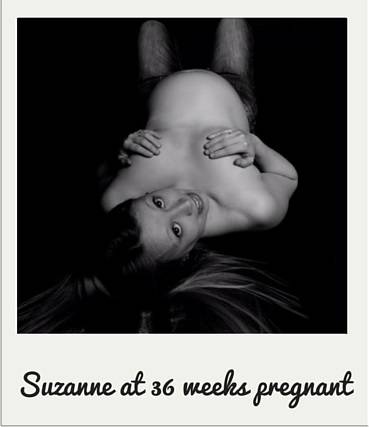 Physically, my pregnancy was near on perfect, yes I got a bit tired and needed to take a week off work, but that’s by-the-by. But emotionally, it was a different story. My constant love/hate relationship with my body reared it’s ugly head when I didn’t get the ‘perfect bump’ – the one that is portrayed in all of the pregnancy magazines. Mine was a ‘B’ shaped bump so immediately I thought I’d done something wrong. What the heck could I have done?

I vomited at the ward visit to the RVI when they did a show and tell of all of the instruments that ‘may’ be used in birth. Who in their right mind wants to see them?

I stuck my head in the sand when it came to possible complications that could arise and read nothing. I liked the bubble I was in and I wasn’t going to do anything to burst it.

Then there was the labour. I sounded (apparently) like a screaming banshee and 39 hours and a hideous forceps delivery later, little Emily Elizabeth was born. My best friend was with me from the start of the contractions. I insisted on going for a cuppa in the tea room* on Belle Vue Bank, Low Fell ; when I literally stood up at the start of each contraction, she insisted on me going to get a tens machine. Richard took over and had to watch his usually very composed financee, change into a gibbering wreck.

I was so drugged up (something I didn’t expect to happen) that I didn’t realise I had a team of people behind me when the epidural had not been administered correctly. I was then prepped for theatre as I got so tired that I was no use to anyone, and as my waters had been broken for me, I really didn’t have any other option.

At this point, I hit an all-time low. I did not want to go to theatre.

After the birth of Emily, our daughter was passed to Richard and a lovely photo was taken, but there wasn’t one taken of Emily and me or the three of us. I can’t remember if this was because I requested it or ‘just because,’ but instead of having a beautiful picture of the three of us on that day, I have memories of being scared and alone.

I sustained a double prolapse from over-exuberant pushing and I went through two years of physio to help.  To this day I’m still not right, Pilates helped a little but apparently, reconstruction wasn’t an option.

Beautiful Emily was born with Erbs Palsy and was my little teapot. I felt guilty, viewing it as my fault for being so stubborn and not accepting a C-section, I put my baby through this and how dare I do that?

And breathe. I’ll take a break and get part two finished very soon.

* the tea room is now a dog grooming parlour